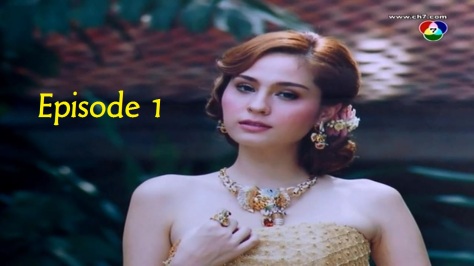 I like this photo of Kwan (the actress, even though it is the name of the actual character) because she looks so feminine and dreamy. I’m not quite sure how it relates to a spa, but she sure is pretty, isn’t she?

Before I start, I have a confession to make. This is my first Om lakorn where he plays lead. The first time I saw him was in Pinky’s lakorn Jao Ying Lam Sing where he played the villain, and I couldn’t stand his monotone voice. I cringed every time he was onscreen, and his voice was so distracting I couldn’t make an accurate assessment of his acting. I avoided him for a long time after that because every time I tried to listen to him talk, it just grated my ears, and that’s why I’ve never seen the new version of Tawee Pope even though I wanted to check it out. I finally decided to try him out again in Wan Nee Tee Ror Koy and discovered either one of two things: one, he was less monotone now, or two, I had finally built up enough resistance against his voice. Either way, he was more bearable to watch onscreen now. Unfortunately, I didn’t quite take to Wan Nee Tee Ror Koy and stopped watching after two episodes (maybe I wasn’t in the mood for action and politics at that time). I’m hoping this lakorn will make me change my mind about watching his lakorns.

As far as first episodes go, it wasn’t so bad. It was certainly the faster paced one out of the three in that time slot. It did have some slight over-the-top moments, which prevented this episode from crossing over from “not so bad” to “good,” but I’m hoping will be toned down in future episodes. The director seemed to know what the audience wanted and gave it to us.

Over-the-top moments aside, I did have two major complaints. One was Khem’s fingernails. Working in the fishing industry, I can only imagine what a hindrance those nails would be. I find it hard to believe that such a tomboyish girl would have such manicured, sparkly nails. However, I could buy that despite being a tomboy, her nails symbolize the fact that she does have a feminine side to her, BUT! Kwanta had the same nails! Okay, maybe I can even buy it as one of those twin things where even separated, they accidentally dress the same or work in similar professions, etc., but I think it’s a Kwan-the-actress thing and not a Kwan/Khem-the-twins thing. I don’t think actors and actresses need to go to extremes to immerse themselves into their characters (though it does make them seem very dedicated and professional), but manicured nails — or in this case un-manicured nails — seem like a rookie detail that a seasoned actress like Kwan would have known to take care of.

My second complaint isn’t really geared toward the lakorn itself but Ch7 lakorns as a whole. I admit it, it’s cute when the leads sing the songs, especially if their voices are good, but would it hurt them to get professional singers? It would raise their production level considerably. However, if they really want the leads to sing, could they at least record them professionally? Kwan and Om’s song is cute, but it sounds like they’re singing karaoke. Maybe it’s just my video (because the audio wasn’t so great), but I have a sneaking suspicion it’s not.

Plot alone, though, it’s kind of right up my alley. Yes, twin storylines do get tiring, but I always like them anyway — especially if they’re done well. I’ve heard great things about Kwan and Om’s chemistry, so I have high hopes. My only worry is that it’s going to end up like Sood Sai Pan where the real Kandawasee just became an extension of Thiti’s idolized version of the fake Kandawasee. I kept waiting for the moment when Thiti falls for Kandawasee because she’s Kandawasee and not the nicer version of Kandamanee, but it never happened. However, I digress. What Ch7 does well is give us lots of moments between the leads, so I have hopes that Chanon and Khemika’s relationship will develop nicely (and preferably away from Kwanta).

P.S. Let me know if there are any problems with the subtitle. I have no idea why but some lines started duplicating themselves when they overlapped (like when there are notes or when the song plays). I fixed everything I saw, but if I missed anything, please let me know.

The videos are in mp4 format because the avi version is twice as big (2+ GB). The mp4 files are roughly around 900 MB. I could upload them as single files, but I don’t know how most people feel about that. If you have an opinion one way or another, let me know.

Please use HJSplit to join the parts together.